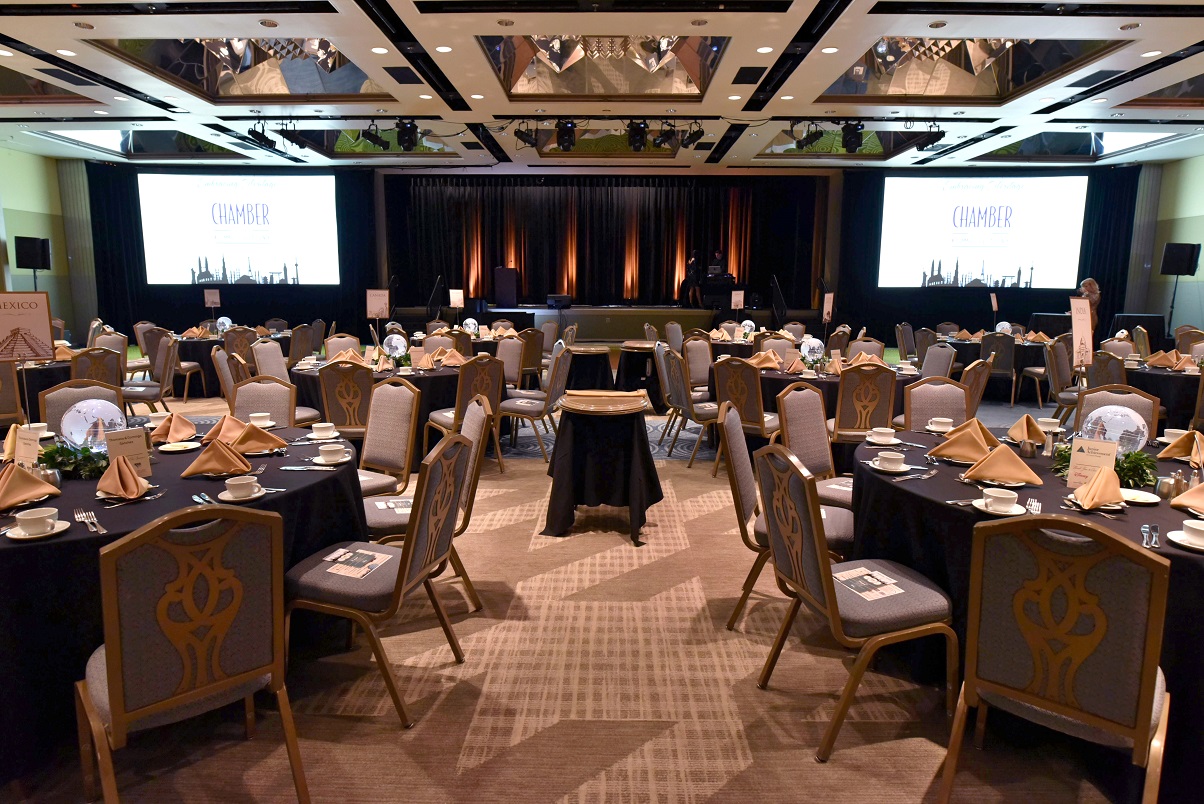 On Saturday, January 25the Chamber celebrated our 95th Annual Meeting at Disney’s Contemporary Resort.  We were sad to say goodbye to 2019 Chairman of the Board Rob Rosen with Edward Jones, but thrilled to watch him pass the gavel to Adrianna Sekula, Government Relations Manager with Walt Disney World Parks & Resorts.

The evening had the theme of “Embracing Heritage,” and each guest table was themed to a different country around the world.  The menu consisted of appetizers from Japan, Africa, and Puerto Rico with French Cut Chicken Breast and Mexican Bread Pudding for dinner.  A photo booth provided by Photoboom allowed guests to send postcards from their travels “around the world.”

Prior to the formal program, guests gathered for a cocktail hour featuring beverages representing Mexico, Scotland, Russia, and more locations around the globe.  Attendees also had the opportunity to snap a photo with Mickey and Minnie who are always gracious hosts at the Contemporary.

The Chamber handed out awards to members of the Chamber community throughout the night.  The Ambassador of the Year Award went to Ty Haskett, Director of Business Development for Audio-Visual Management.  Ambassador of the Year honors the Chamber Ambassador who has stood out among their peers throughout the year.  Chamber Ambassadors dedicate many volunteer hours to Chamber functions and member contact.  Ty, who was chosen by his fellow Ambassadors for this award, stated that he “feels he has been able to utilize connections as an Ambassador to help further business commerce and change within our community.”  Congratulations Ty!

Each year, the Eagle Award goes to the Chamber Area Council that has best exemplified the Chamber’s Mission, Vision, and Values throughout the year.  Directors on the nine area council boards served a collective total of over 1500 hours in 2019, and that does not even include their time spent planning and executing initiatives, programs, and events.  This past year, the nine area councils also awarded over $8500 in scholarships, collected school supplies for six Osceola County schools, and supported many local efforts and non-profits.  It was extremely close, but Elcy Hernandez, Community Relations Manager at Orlando Health, announced this year’s recipient of the Eagle Award as the Celebration Area Council.  You can follow the Celebration Area Council on Facebook to keep up with them throughout 2020 and beyond.

The Linda Goodwin-Nichols Service Award is named after Linda Goodwin-Nichols, two-time Chairman of the Kissimmee Chamber Board of Directors, and a stalwart of Osceola’s Business Community for over 40 years.  Throughout her career, Linda has epitomized community involvement and giving back selflessly, and this award honors an individual who will carry on her legacy.  This year’s finalists for the Linda Goodwin-Nichols Service Award were Kelly Trace with Reach, Thomasa Sanchez with the McCormick Research Institute, and Rev. Mary Downey with the Community Hope Center.  Thearon Scurlock, General Manager of Old Town, presented the award to Kelly Trace, who has built her company with a focus on giving back to the community.  Kelly said, “100 years ago when my family was here they were thinking of me, and we have an obligation to think of the people who are here now and who are coming after us to take care of this community.”

To recognize the importance of the Chamber’s core values of “Embracing Heritage,” “Creating Opportunity,” and “Building Unity,” and our partners who promote them, in January of 2018, Chairman Tim Finkenbinder announced the creation of an award to emphasize these values – particularly “Building Unity.” For the second year in a row, the Chamber presented the Unity Award at our Annual Meeting.  Finalists for this award were Kevin Crain of Osceola Press, Hector Lizasuain of Magic Development, and Tom Tompkins of State Housing and Development.  Chris Gent, Director of Corporate Communications at Kissimmee Utility Authority, presented the award to winner Tom Tompkins.  In a moving speech, Tom expressed, “I love the Chamber…because it is a community in itself.  We make it a community, and with that, you have to have community in order to have unity.  Heck, you can’t even spell community without “unity!”

Alex Adams, COO of AdventHealth Kissimmee, announced this year’s Hall of Fame Inductee, Patsy Heffner.  Patsy Heffner has had a long, illustrious career throughout Osceola County.  She even served as President of the Kissimmee Chamber from 1976 to 1980, and was the first female “Big Boss” of the Silver Spurs Rodeo.  She retired from her position as Osceola County Tax Collector in 2017, a position she had held since 1999.  The Chamber is thrilled by this excellent addition to our Hall of Fame.

Finally, Chair Adrianna Sekula closed out the night with a meaningful toast that paid tribute to her immigrant heritage and the history and diversity of Osceola County, and looked forward to her plans for 2020, while always remaining true to the Chamber’s values of “Creating Opportunity, Embracing Heritage, and Building Unity.”

Kissimmee/Osceola Chamber Visits with Our Federal Representatives in August

During the week of August 9, 2021, Kissimmee/Osceola County Chamber President/CEO John Newstreet and Government…

Last year, as we began the pandemic recovery process, the Chamber launched our Osceola Round-Up…